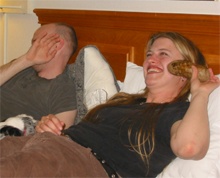 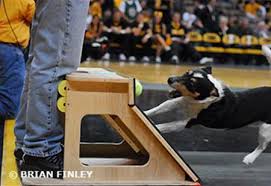 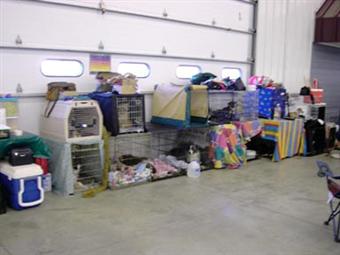 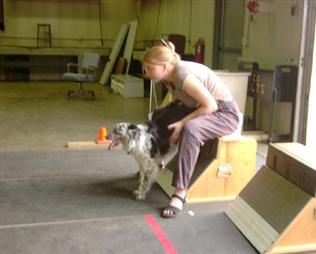 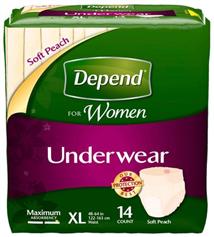 This is the opposite of a blooper, but to show off Lizzie's amazing bounceability, Angie announced she could not only jump OVER the hammock, but that she would jump over it with someone sleeping in it. She did. The proof? (IFD 09/07)

Remind us not to let Barbara drink too much when we are staying in a hotel in Albert Lea with all the Sturgis bikers. NO ONE needs to hear that Barbara wants to moon all the bikers in the parking lot! Ouch. (08/07)

Super 8, Albert Lea. The special suite on the top floor. We can all fit, we can all party. Let the good times roll! Except, um, they gave the room to someone else. Confirmation number? Doesn't matter. Notes and names of person talked to? Yep, it was him, he remembers, he's sorry, but we still can't get the suite. Complain, wait, listen to phone calls, complain, wait. In the end, he gave us two rooms for the price of one. Not quite so convenient for partying, but still good enough for Barbara to moon bikers! (08/07)

Barbara (bulging disc) and Beth (hip redo #2) were comparing medications and Beth mistakenly heard Barbara say her RX was for Cialis (penis med) instead of Celebrex (pain med). Beth was laughing so hard she was crying and when asked if she needed adult diapers, she said, "that depends." (02/07)

Keep out of Angie's way when she's using the duct tape roller! Angie duct-taped Mary's power vacuum to the mat during set-up for our Skidz on Ice tournament on 2/02/07.

Submitted by Jayne (DGD 11/07): Eleven-year-old Zoe continues her descent into senility, this time marring an otherwise flawless weekend by needing to stop to smell Jacci's pants. While not normally a bad thing, it is when Jacci is the boxloader! Zoe got back on task once she checked out the mysterious stain, but the 10.7 second split didn't do much to help her vets team win that race. [Jacci adds: It's always the boxloader's fault. Zoe, start dog running on a vets team, stops after triggering the box to sniff Jacci’s jeans. Zoe remembers suddenly about the ball, retrieves ball from near the backstop, and returns to Jayne, a 10.2 second clean run.]

Submitted by Jayne (DGD 11/07): Cisco was so excited about flyball that he found himself in the very embarassing position of not being able to move! His "5th leg" was hanging so low it hampered his ability to jump out of the van. Thankfully his big brother Alta (who would never do anything so ridiculous) filled in for him that race!

Okay, so Angie's always late. Everyone knows that. She cruises in at the last possible moment, just before we need her dog for the next race. Especially if racing starts early in the morning. As it usually does. We try to compensate by telling her racing starts earlier than it actually does. Generally, to no avail. So, we're in race #3. Racing has started. No sign of Angie. Race #2 ... no Angie. It's a 4-dog team. We called her. "I'm really sorry, I left late -- I'm still 1/2 hour away." In a panic, we run in and beg Lori with host team IFD please to let us add an emergency dog (Ruby) to the line-up because Angie's not here! Lori let's us. Race #3, we all head in, including Steve with Ruby. Got'cha! There's Angie, waiting patiently for the race to begin. She'd been the first to arrive that morning (because we had all told her yesterday racing started 1/2 hour earlier than it actually did). As soon as she discovered she'd been had, she began to plot. She parked far away and watched us all arrive, watched us all begin to panic. And then, with impeccable timing, walked in just in time for the race. In a somewhat feeble attempt to get back at her, Steve and Adam searched out her van, locked it, and confiscated the keys in the hope she'd think she'd locked them inside. Angie, smarter than the average bear, was not taken in by this. Score: Skidz 0, Angie 10. (IFD 09/07)

Submitted by Jayne & Barbara (Omaha 4-Play 04/07): Rippy's Tumor. Steve was all concerned because he felt a seriously large bump on Rippy's belly. Then in front of all of us Barbara had him look at Rippy's belly and he discovered that the tumors were actually just Rippy's nipples. In Steve's defense, since she's not spayed they are larger.

Submitted by Jayne & Barbara (Omaha 4-Play 04/07): Cisco's Death Defying Dive. So Cisco really loves that orange Cuz Ball and every once in a while he gets it out of the tug and it goes bouncing all over. Well Omaha has ring gating and the Cuz Ball bounced thru one of the holes & Cisco wasn't about to let it get away. I could just see what was going to happen, he was going to smash into the gating and knock down the entire side with a tremendous crash, causing major embarassment. But instead, quicker than I can say CISCO NO, he just jumped THRU the gating. He was so smooth about it, it was difficult to believe he had actually done it! I picked him up from the other side - didn't want to tempt fate by having him come back through.

Submitted by Barbara (Omaha 4-Play 04/07): On Saturday we were all lined up to race, Joe Goetz is judging. Steve lets go of the start dog - early start. (Angie and Jayne were huddled together.) Then, Angie runs out of the ring. We're still racing the same heat ... I say to Steve, "she's going to get her tug, waste some time!" We wait. We wait. We wait. Finally I see Angie coming back into the ring (I figure Joe is about to blow a fuse over the wait), and in she comes ... with a different dog!

Laura made the most memorable effort to get to the Hawkeye men's basketball game demo (3/1/06) despite Amber locking Laura OUT of her car, Laura being unable to go for help for fear Amber would destroy interior of said car, trying multiple times to call Marcus who was too busy playing on the computer to answer her calls, finally calling Steve (she was just outside of Steve's house at the time) and having him email Marcus to tell him to call her, Marcus finally calling and then driving out to deliver spare keys. To top off her night, on the way HOME from the demo, she was unexpectedly accosted in the dark in the middle of the road by a herd of enormous BLACK cows (through which she handily maneuvered - and everyone made it home happily and safely, and no doubt with a great sense of relief).

Best example of self-sacrifice: If we get ONE more NF today, Blue will NOT get her ONYX. AGAIN. So who double red-flags on her start for the next heat? Yes, Bekka. (HH 7/09/06)

Laura challenged Angie's gift for drink when the only leftover in her "doggie bag" upon leaving the steakhouse in Omaha was a baked potato: someone said it would make a good Kong filler! (No wonder Marcus denies knowing her!)

Before the Hawkeye men's basketball demo (3/1/06), Bekka (i.e., owner of nine dogs) phoned Jayne to say Belle was in heat - could she please borrow a dog to run? Yow.

Angie helped herself to a cookie in the hospitality room at the men's basketball demo (3/1/06), got caught by a Per Mar Security Cookie Protector "stealing" a cookie, and was rescued by a cop who told the Protector the cookie was his and he gave it to her. This could only happen to Angie.